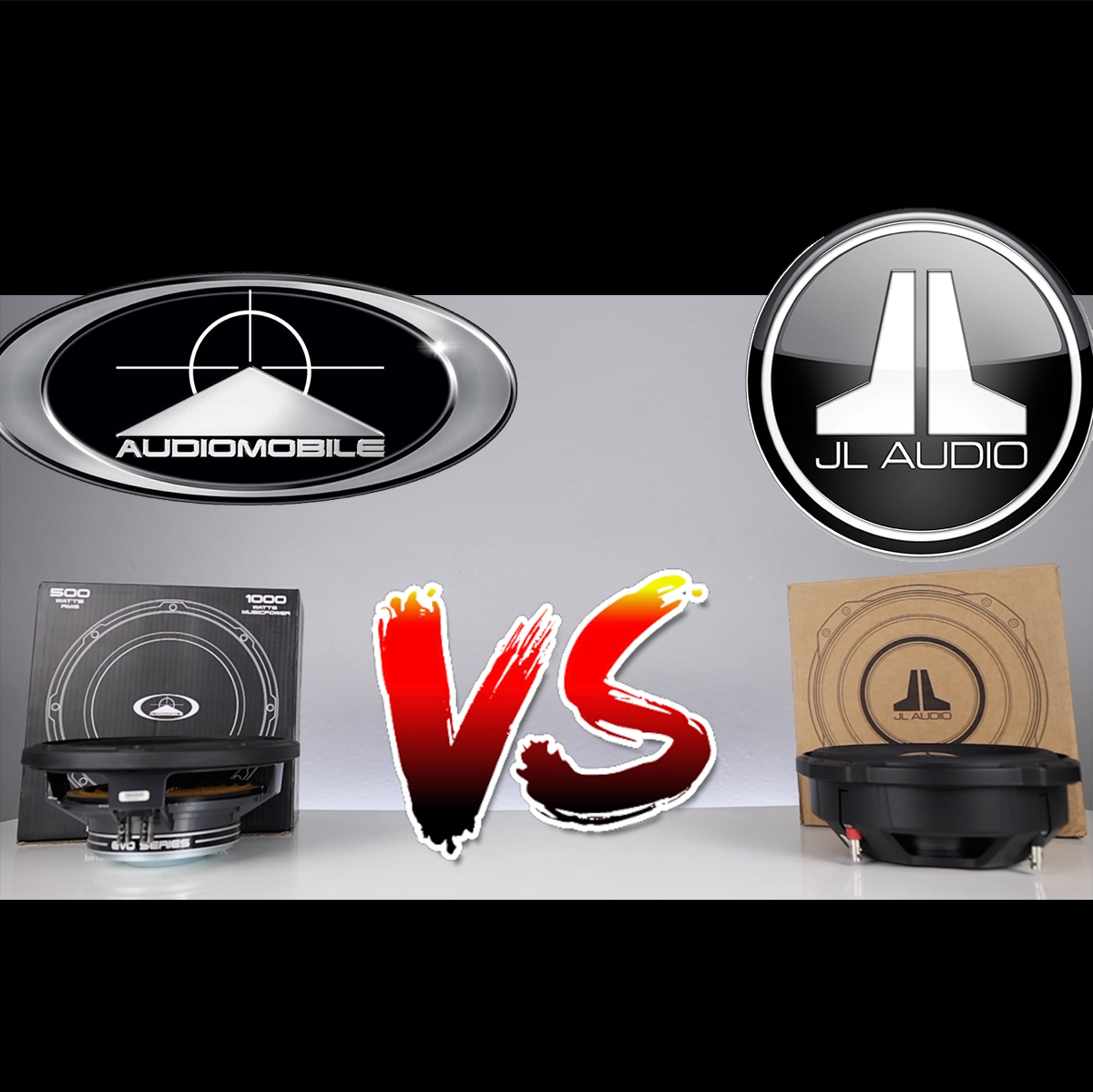 JL Audios 10TW3 has been hands down the leader for shallow woofer in the car audio world. A subwoofer that need only a half cubic foot of air space and can produce deep bass…not typical for a shallow sub. This has be the go to for car audio shop and end users where space is limited especially in pickup trucks… and many manufacturers have tried to make a shallow subwoofer equal or better then the TW3 but with little success…. Then we get a call from a little known compnay called audio mobile claiming they have a low profile woofer that’s better then the JL TW3 and they have charts from an indenpent lab that  prove it…. Ok shows us what you got…

There are lots of vehicles out there that dont have lots of space to install a subwoofer box mainly under or behind the seat in trucks but if you have a car with a trunk and want to take up ½ the space of a traditional subwoofer then you’ll want to consider shallow mount woofers.

Now techically the audiomoible doesnt label there woofer a shallow woofer but this it has a mounting dept of only 3.9 and the jl audio is 3.25. But if you factor in the the JLs surround sits up much higher then the audio mobile and when this woofer is moving if you set it too close to something then it will rub on it an potential damage the woofer so in this case youll want to add the JL audio specific grill which sticks out just enough to clear maximum excursion.  so if you take the JL audio with that grill and the audio mobile with its grill then …….

So if we look at the mounting depth along with the need front space for the grill then we’re about even.

Ok with that covers now in we’ll go over specs

For both subs along with their design features then we’ll head out to the bay and take a listen to a pair of each of these subs in our 2017 Silverado in an under the seat box as they go head to head against each other as well measure SPL and listen experience. Also we have some test charts from ……. that measure SPL for each of these speakers so we’ll go over those as well. Ok let check out the specs. Staring with the TW3

JL Audio uses a molded construction that extends over the motor system’s edge, supporting the spider on the outside and the big diameter voice coil on the inside of the motor. Instead of enclosing the coil as is customary in most woofers, the huge diameter voice coil allows the magnet to rest inside it.

This frame design feature allows  mounting Subwoofer in tight spaces because outside dimensions are reduced, allows it to be mounted in a space that is very similar to that required by the next smaller round woofer frame

Frequency response of between 10-800hz

linear type spider with . woven-in tinsel leads through the spider. It has an Exclusive Integrated Aluminum ‘Shorting-Ring’

The copper coils are wound on a Kapton former. the cone is made of Kevlar-reinforced composite, which was originally devel-oped for professional subwoofer

applications with a very high stiff-ness to mass ratio.Six radial cooling vents are builtinto the woofer’s frame, which isalso cross-drilled under the spiderto improve voice coil cooling. Asa result, the woofer has a powerrating of 500 watts.

k that’s that let’s hit the bay. Again we’ll be using a 2017 Silverado with an under the seat box build to exactly 1 cubit foot total inner volume perfect for a pair of both woofers. We’ll be using a Memphis VIV1100 and we’ll use our meter and some math to 800 watts for the Jls and 1000 watts for the audiomobles. And we’ll be measuring SPL Levels on our term lab meter and we’ll test tones along with music.

energy ceramic magnet motor. It has a

linear type spider with . woven-in tinsel leads through the spider.

It has an Exclusive Integrated Aluminum ‘Shorting-Ring’

The copper coils are wound on a Kapton

former. the cone is made of Kevlar-reinforced composite, which was originally devel-

applications with a very high stiff-

into the woofer’s frame, which is

also cross-drilled under the spider

to improve voice coil cooling. As

a result, the woofer has a power

Ok here is the score card,

And xmax JL wins when it comes to depth, so it is shallower

This was a tough one to judge: But I did notice a difference in volume with the Audiomobiles being a little louder, now this is consistent with both the labs test and our real world test because  the lower a woofer can play the louder it will get. Both have accurate bass, great roll off in the lower frequency range,  but the audiomobile does reproduce those lower frequencies between 35-45 hz better which is important for a lot of music genres.

The winner with a final score of 3-0 is audiomobile…. Ok I.m a believer… now not to say the JL 10TW3 isnt a great woofer because it is, we have sold this woofer for years to our customers with a high satisfaction rate, and it continues to be a top selling woofer throughout the car audio industry..

but: based on all the things we covered the audiomobile EVO  is the better woofer, better specs, response better to  deeper bass, handles more power and an it sounds excellent. OK that will do it … now we’re gonna be doing a video the top 5 shallow woofer so if you have an suggestion on what woofer to include drop a it in the comment section below.. Thank for watching guys josh from breaekrs stereo and performance signing off.

Ok lets take a look at the cogent labs charts before we do our test:

Now again these tests were initiated by Performance and Sound Mag for ther test reports and review section. and we’ll leave links to description below if you want to check out the full articles.

Here is the JL chart.

So this means the woofer registered 71 db when playing 35hz at 1 watt 1 meter in the recommend sealed enclosure.

And from here we start to dop

Now this chart was taken from and article that included their MCAR which is a passive radiator set up. And we’ll be taking a look at that product in the near future so look out for that one.. But in the article they tested and reviewed the EVO on its own. So dont pay attention to the black line thats the chart with the addition of the passive radiator, we’ll be looking at the gold line only. So lets start with the same 35hz and that registered a 77.5 reading vs JLs 71db

So out of the 9 frequency we look at here the audiomobile evo out performs the jl 10tw3 6 to 3.

WHAT FITS MY CAR

NO THANKS, CONTINUE WITHOUT VEHICLE SEARCH

Free Shipping on all orders $99 and up, excluding items over 70lbs

Their is additional shipping costs to Alaska, Hawaii, and Puerto Rico. Business days include Monday - Friday and exclude UPS holidays.

What fits my car:

What fits my car: